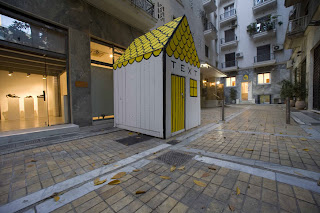 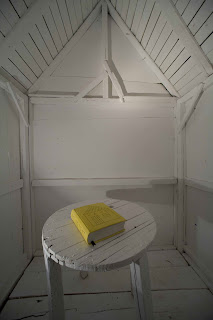 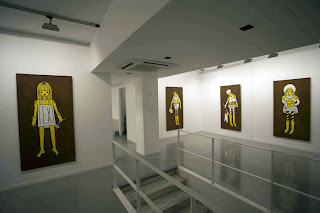 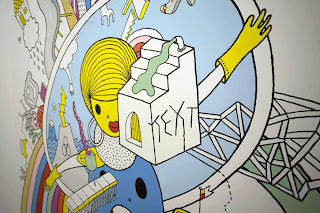 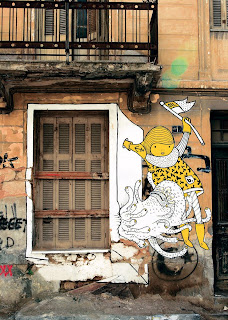 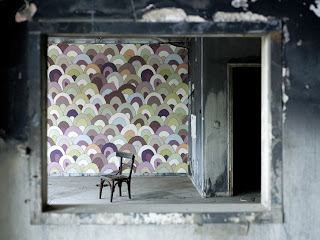 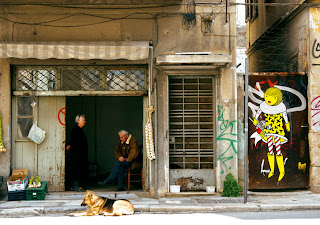 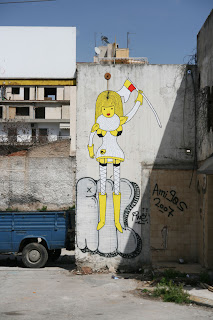 The concept of the exhibition is based on a book that the artist has made and is exhibited inside a wooden construction, a house, installed outside the gallery on Valaoritou street. "Missing Text" is according to the artist everything laying underneath the symbols and figures regularly depicted in his works and at the same time anything that cannot be written on walls.

b.'s yellow and black figures have taken over the urban landscape of the city of Athens. Mermaids, girls with anchor tattoos on their arms, colorful hamburgers and humanlike octopuses constitute the universe of b. and come to life on the walls and broken windows of abandoned houses.

The artist views the city as an open studio, as a big canvas without limits where his creatures are winking playfully to the viewers and challenge them to discover the b. world.

The exhibition "Missing Text" reveals the user's guide to the artist's own universe. The skilfully drawn book is the artistic manifesto of b. and acts as a time machine that travels the viewer to the yellow and black world of the artist. The ticket is a yellow metal key, hanging inside the gallery.The first room of the exhibition is taken over by seven symbolic figures (acrylic on rusted metal), which resemble b.'s army. Each one bears a symbol of b.‘s work such as a watering pot, an oil flag, a purse, a flower, a book or a fish.

Other works on canvas and wood are also exhibited and of course b.'s characteristic octopus and hamburger figures are also present, along with a series of nine portraits of yellow skin ladies each one of them with a different spectacular hat.

In a world where everything is fast, flashing before our eyes with the speed of light, in a city full of isolated individuals, tall buildings, and full of cars honking, corporate logos, religious symbols and team emblems, b. has succeeded in capturing our attention! We stop in front of his wall paintings, and throw a sweet smile at the girl with the yellow dress standing before us. 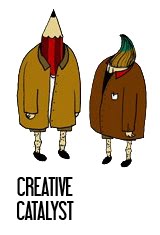